The city that never sleeps sure likes to eat. Although that does not reflect on the Big Apple’s uniqueness – everyone likes to eat – but the way New Yorkers’ found ways to indulge their love for food does. Already considerably different from most other places in the US due to its sheer size and diversity of demographics, New York City has also grown to cultivate its own culinary culture. That culture, like the city, is incredible in its variety: the different immigrant groups of the world have lent their best dishes to the city upon settling here, and over the years, the food has become an essential part of any experience centered in the legendary concrete jungle. In staying true to that aforementioned variety, listed below are the seven most iconic foods of New York City.

One of the most recognizable food in the world, this traditional Italian dish has come into a life of its own in New York. Unlike back in where it originated, NYC pizza is most commonly served in slices, not whole pies, when buying on the spot; furthermore, when pies are ordered, nowadays it is most often through delivery services, and not at dining establishments. Notable exceptions are some of the first pizzerias to open in New York City in the early 1900’s – Lombardi’s in SoHo, and Grimaldi’s by Brooklyn Bridge. When done right – with a thin, hand-tossed crust, fresh mozzarella, a medium amount of tomato sauce, with an ample radius – this apparently simple combination of bread, tomato sauce, and cheese inexplicably transforms into the most commonly enjoyable food of the biggest city in the United States. 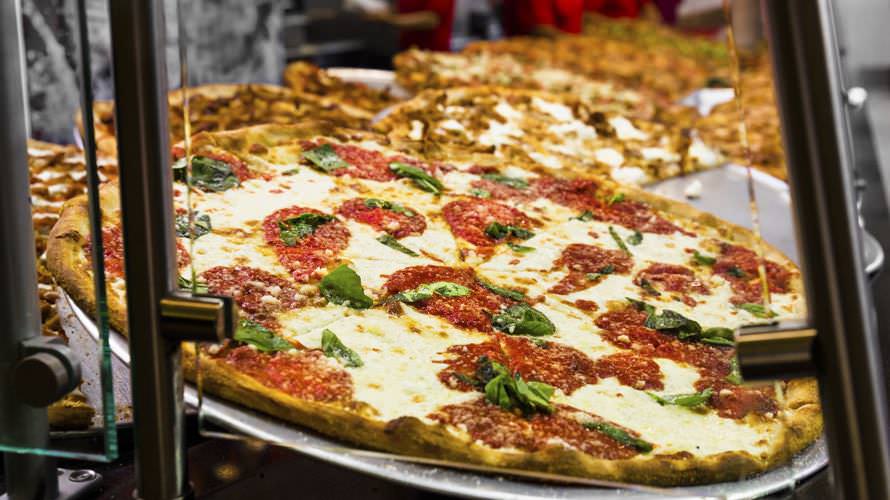 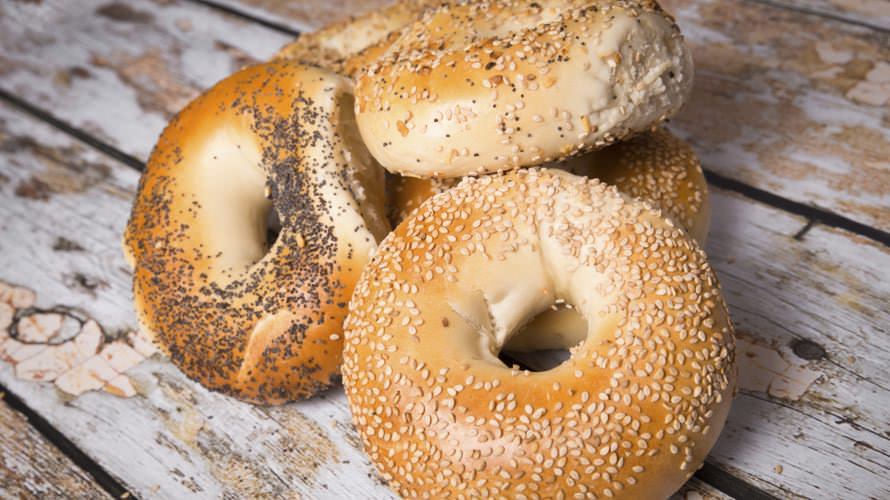 Another food that first appeared on the NY radar in the early 20th century (this one – with Polish Jewish immigrants), it, like pizza, is a staple of the city’s cuisine. The simplest form of the bagel is a plain one – boiled white bread with a crunchy outer sheen and crust and a hole in the middle, toasted and buttered on the inside. As it got more and more popular in the 50’s and 60’s, it became common to put more and more other foods into bagels; the most classic New York combination is lox (salmon) and cream cheese. For those journeying through their lives at the non-stop pace of the city, a bagel is the perfect breakfast. It is just fast enough to make, with enough calories to get people to the next meal, and delicately satisfying in its ideal mix of soft and crispy goodness. Particularly when prepared at the highest quality places – Leo’s Bagels, Ess-a-Bagels, Absolute Bagels – there aren’t many better ways to start your day.

The iconic American dessert also has a unique niche in the culinary world of the Big Apple. This variation of the cheesecake is made, like most others, with heavy cream or sour cream, but, importantly, never features additional foods or flavors. A slice of true NYC cheesecake appears plain: a small, white pyramid of sweet, richly creamy flavor, almost intense in its clash between dense structure and soft consistency. Popular destinations for trying cheesecake are Eileen’s Special Cheesecake, Ferrara Bakery & Café, Jean Danet Pastry in Brooklyn, and Junior’s Cheesecake. 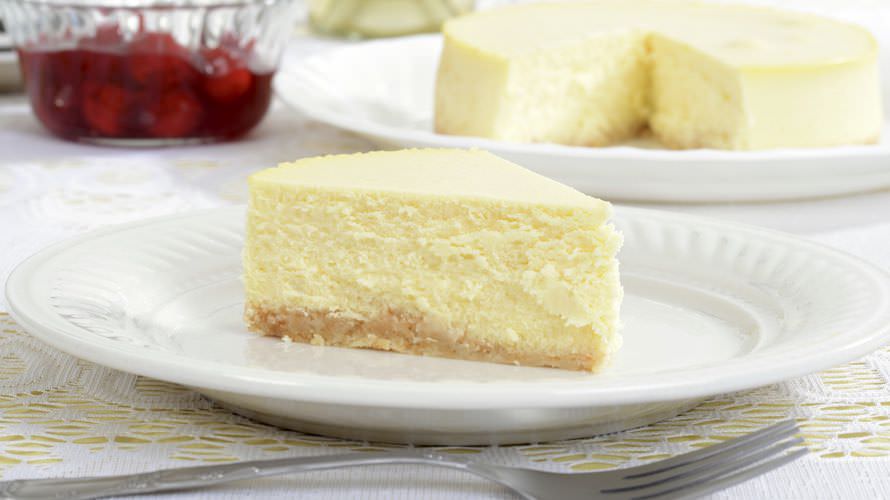 The originally German creation of an elongated beef sausage two-part bread has become one of the symbols of fast food chains across the world, but it is still incredibly popular on its own in New York. There are hundreds of places (not to mention the countless street vendors) around NYC that make quality hot dogs, with Mile’s End Deli, Crif Dogs in East Village and Gray’s Papaya being some of the best ones. In all these places, of course, like with any other food, you will find that New Yorkers have made it their own: anyone serving hot dogs in the five boroughs can tell you that they should be eaten with yellow mustard and a sprinkle of steamed onions. Less authentic, but almost equally as popular New York hot dog variations include filling the empty spaces with coleslaw or chili and putting some good old bacon on everything. For the simplest of tastes, just pour some ketchup onto the meat, and dive right into it. 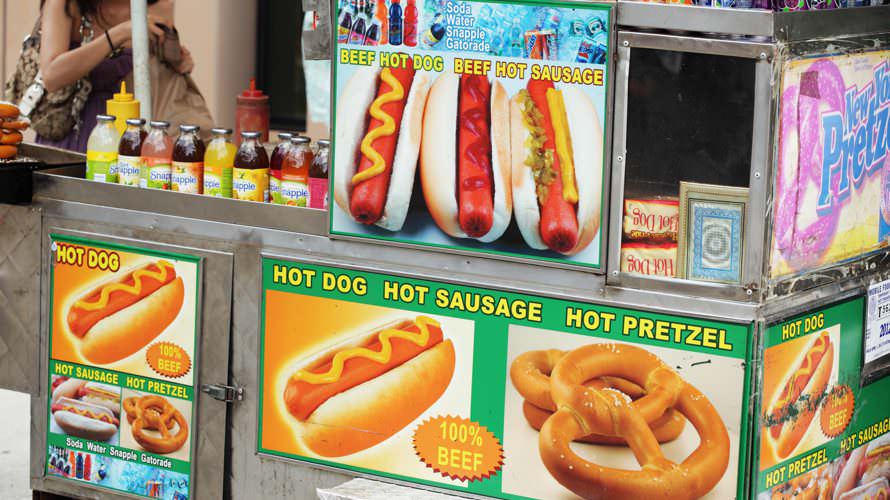 Owing its popularity largely to the way the meat of it is prepared, this sandwich has entered just about every deli and storefront in the Big Apple. To make “pastrami,” beef is usually heavily pressed with salt, loaded with herbs and spices, then smoked and steamed. The firm, flat cuts are then placed between rye bread and mixed in with spicy brown mustard to create the intricate flavor of this New York food. Pioneered by the Romanian Jewish population in the 19th century, the sandwich eventually made its way to the famous Katz’s Delicatessen deli, where it remains the most popular item on the menu. Truly, on a quest to find the best things to eat in New York, you don’t need to have what Sally was having at Katz’s; you can just order the pastrami sandwich. 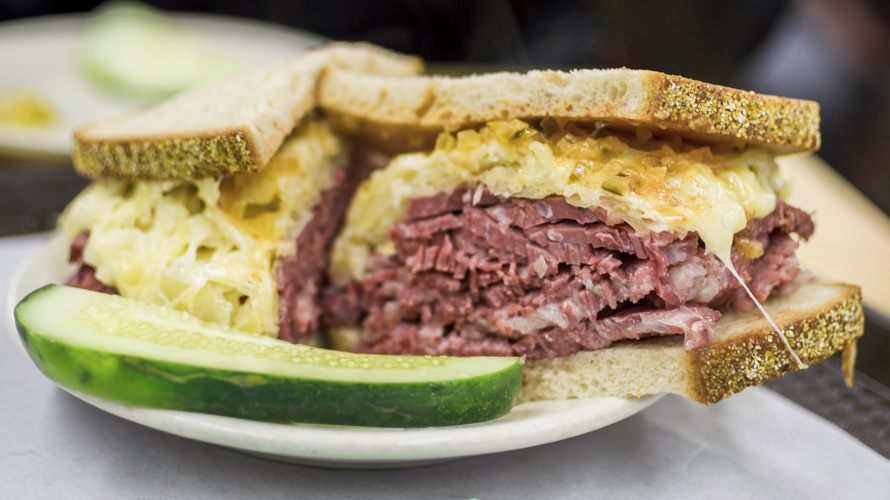 Although the gyro (properly pronounced “yee-roh”) is, as of now, the most central food of Greek dining establishments all over the United States, it has yet to enter the mainstream culinary culture of the nation. However, it has largely completed that transition on the New York front: gyros are universally popular across the city, and have intrinsically linked Greek food to New York food (much like pizza did the same for Italian cuisine). A concoction of delicately cut meat slices of either lamb or chicken, mixed vegetables, and authentic tzatziki sauce, it can be served on a platter, or, more traditionally, on pita bread as a wrap. Although the latter method is the messier way to eat a gyro, this does not detract from its popularity; there is something viscerally satisfying in eating a juicy, tenderly compact gyro with your hands. Tony Dragonas and Gyro II are some of the highest rated places to eat Greek in, although any and all restaurants, delis, and food carts would be more than happy to serve you their renditions of the perfect New York gyro. 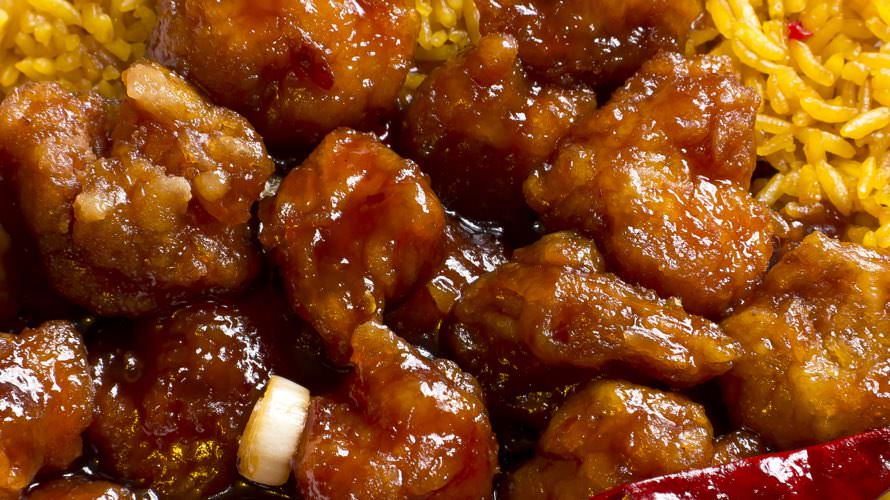 General Tso’s chicken is, perhaps, the poster image for New York Chinese food. Although immigrants from China in the 60’s and 70s’ developed both the cooking style and the name of it, it has never quite taken root back in the homeland. The immediate success of this sweet-and-sour, deeply friend, tangy chicken with delivery services in New York (and, later, cities all around the States) has almost nothing to do with its counterpart in Taipei of Hunan Province, where the dish is thought to have been originally created. This food is one of the most easily accessible throughout the city, served in every Chinese place, deli, and food court. Although the best bet on General Tso’s is, of course, ordering it for take-out or delivery at any respectable food establishment. Although it may not be authentic Chinese cuisine, it is a quintessential New York food that many inhabitants of the city cannot imagine life without.